Poll tracker: the latest from Germany, Italy and the UK

By Alex Porter
Warning: count(): Parameter must be an array or an object that implements Countable in /home/policyne/public_html/stateoftheleft.org/wp-content/themes/state-of-the-left/includes/article/article-header.php on line 41

In the latest instalment of our international poll tracker, we turn to three countries where the tables are turning for the centre right and left: Germany, Italy and the UK.

In both Germany and Italy the centre right is firmly back on the front foot.

Despite a strong start to his leadership of the party, German SPD chairman, Martin Schulz, appears to have lost momentum. Recent polling from Infratest-dimap and German public broadcaster ARD found the CDU’s Chancellor Merkel at her most popular since autumn 2015, enjoying an approval rating of 64% in June, with current voting intentions standing at 38% for the CDU, compared with just 23% for the SPD.

The current figures represent a sharp turnaround since the SPD’s surge when Schulz took the reins of the party earlier this year in February, and they briefly overtook the Christian Democrats in the polls for the first time in several years. Reflecting this downturn are the SPD’s recent successive regional election defeats in Saarland, Schleswig-Holstein and North Rhine-Westphalia. With less than three months until Germans go to the polls in September, Schulz has a significant challenge to pick up steam again before the federal election

Another centre-left party suffering at the local level is Matteo Renzi’s Democratic party (PD). When Italians went to the polls for mayoral contests across the country last month, Silvio Berlusconi’s Forza Italia made strides at the expense of the PD. Forging an alliance with the rightwing Northern League, the centre-right party was able to win key PD strongholds including Genoa and L’Aquila, in total gaining 12 cities from centre-left incumbents.

Perhaps surprisingly, the anti-establishment, populist Five Star Movement (M5S), which has been breathing down the PD’s neck in national polls also suffered poor results in the local contests, making the run off contest in a paltry one of Italy’s 25 largest cities. The young movement’s influence, however, should not be written off – in its short history it has tended to fare better in national contests.

At present, the PD and M5S continue to steadily poll as the two most popular parties in the country, with the latest poll from SWG putting the parties at 28.7% and 26.2% respectively, while Index has the two at 26.4% and 28%. In both polls, Forza Italia and the Northern League hover around 14% each, meaning, if they were to join forces again, they could have the potential to put up a formidable fight, or play a key role as kingmakers in the formation of the next government.

However, with the next general election not mandated to take place until May 2018, time remains for Renzi’s PD to turn things around. A snap election in the autumn to coincide with Germany’s had been thought likely, but after failure of the parliament to reach an agreement on electoral reform last month, Renzi and prime minister Paolo Gentiloni have ruled out an early vote.

Meanwhile, the UK’s centre-right is experiencing almost exactly the opposite change in its fortunes. Theresa May’s Conservative government continues to haemorrhage public confidence, following the disastrous shock general election result; an unpopular and expensive deal with the socially conservative Northern Irish Democratic Unionist Party, and what has been widely perceived as a pitiful response to a tragic fire in west London in the immediate wake of the vote.

The latest Times/YouGov poll has Labour stretching its lead to eight points over the Conservatives, polling at 46% to 38% in Westminster voting intention.

This is Labour’s best result in any poll since before the 2003 invasion of Iraq. Quite a turnaround in form for the Conservatives, who enjoyed a 24 point lead when the election was called in April. A fact which points to serious volatility in the preferences of the British electorate. 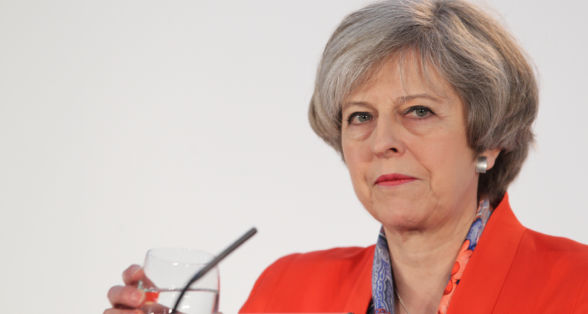